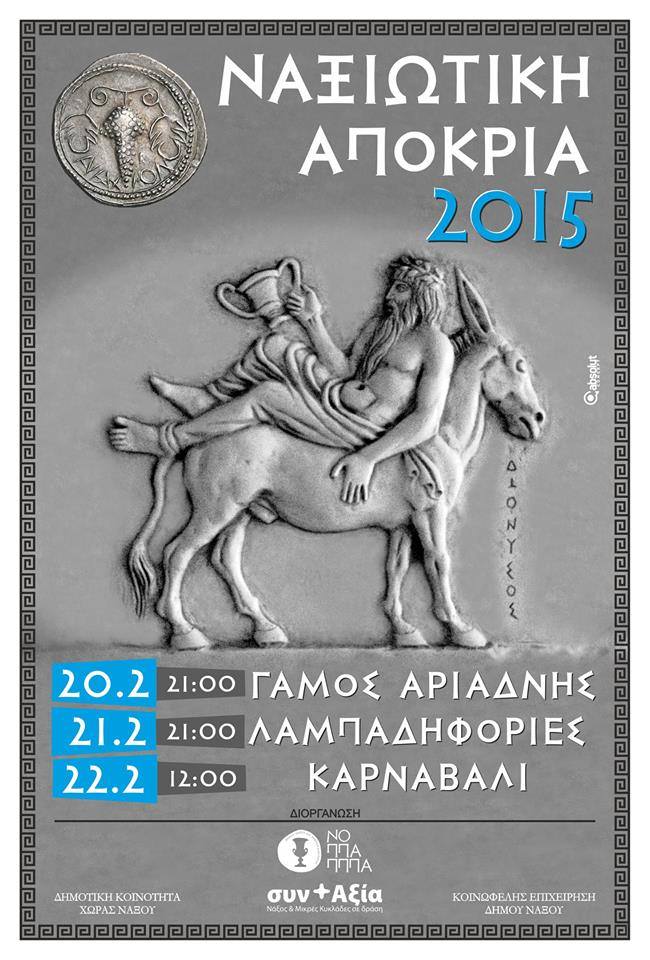 Carnival is celebrated in a unique form on Naxos, as the customs involved are an evolution of ancient Dionysian fetes, taking place in the same time of year as the ancient Anthesteria.

Hearty feasts, with violins, bag-pipe instruments (tsabouna) and drums (doubakia) are an unfailing annual occurrence in the squares and courtyards of churches in many villages of the island, on the last Sunday of the Carnival season. The feast continues into Clean Monday.

In other villages, such as Danakos, Apiranthos and Koronos, young men wearing hoods and bells (koudounati) and holding a phallic symbol (soba) create deafening noise in the alleys of the village –a custom signifying the arrival of spring and meant to drive the evil spirits away.

The procession ends at the village square, where the koudounati join the other dressed-up characters and begin the dancing and song that lasts well into the night.

The similar customs of kordelati and foustanelati take place in the villages of Galini and Eggares on Clean Monday.

Young men wearing colored ribbons and the national Greek costume of foustanela form groups (bairakia) and, led by the standard-bearer (bairaktaris), who holds a thick cane with a colored cloth, head for the neighboring villages where they invite local women to dancing at the square, to the tune of violins and lutes. Reciprocating, the women offer the men delicacies and wine.

In the old days the custom also functioned as a means of facilitating the meeting of young people from different villages and resulted in many marriages. But it is still observed in earnest, relayed from one generation to the next.

About the torchlight procession.

“We felt we needed to do something. The Film Society came into existence, in an atmosphere of general enthusiasm, we thought of organising a torchlight procession, a Lambadiforia. Everything happened at once. Nothing was planned. It was raining, but that wasn’t going to stop us. We met up in the old Venetian walled citadel, the Kastro, each of us with an idea. There weren’t that many of us, just a group of friends eager to do something, anything. We decided to opt for simplicity in our costumes: white sheets which we deliberately dirtied: eyes black with kohl against chalk-white faces. Someone had brought along some ears of corn and we wore these round our necks, our waist and our temples. We carried whatever percussion instruments we could lay our hand on and those who happened to have cowbells wore them round their waists. We went onto the streets, not a clue where we were heading and caring either. We danced from sidewalk to sidewalk, startling passers-by, and making for, laughing and screaming all the while, the Temple of Apollo. That’s how it all started. Just like that.”

Photos of Vassilis Bakalos can be viewed here.