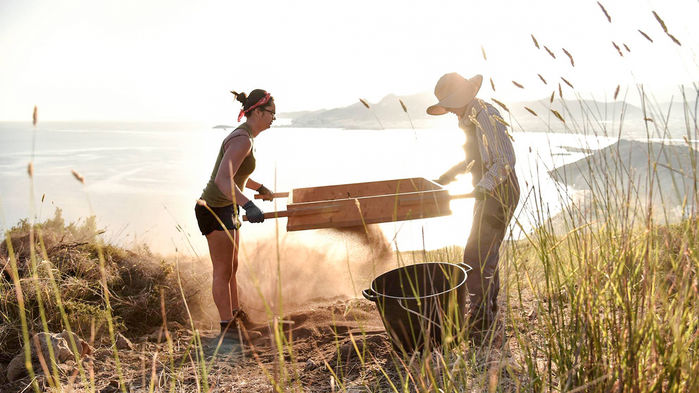 At Stelida on the Greek island of Naxos, researchers have found stone tools perhaps made by Neandertals.
JASON LAU/STELIDA NAXOS ARCHAEOLOGICAL PROJECT

WASHINGTON, D.C.—Odysseus, who voyaged across the wine-dark seas of the Mediterranean in Homer’s epic, may have had some astonishingly ancient forerunners. A decade ago, when excavators claimed to have found stone tools on the Greek island of Crete dating back at least 130,000 years, other archaeologists were stunned—and skeptical. But since then, at that site and others, researchers have quietly built up a convincing case for Stone Age seafarers—and for the even more remarkable possibility that they were Neandertals, the extinct cousins of modern humans.

The finds strongly suggest that the urge to go to sea, and the cognitive and technological means to do so, predates modern humans, says Alan Simmons, an archaeologist at the University of Nevada in Las Vegas who gave an overview of recent finds at a meeting here last week of the Society for American Archaeology. “The orthodoxy until pretty recently was that you don’t have seafarers until the early Bronze Age,” adds archaeologist John Cherry of Brown University, an initial skeptic. “Now we are talking about seafaring Neandertals. It’s a pretty stunning change.”

Scholars long thought that the capability to construct and victual a watercraft and then navigate it to a distant coast arrived only with advent of agriculture and animal domestication. The earliest known boat, found in the Netherlands, dates back only 10,000 years or so, and convincing evidence of sails only show up in Egypt’s Old Kingdom around 2500 B.C.E. Not until 2000 B.C.E. is there physical evidence that sailors crossed the open ocean, from India to Arabia.

But a growing inventory of stone tools and the occasional bone scattered across Eurasia tells a radically different story. (Wooden boats and paddles don’t typically survive the ages.) Early members of the human family such as Homo erectus are now known to have crossed several kilometers of deep water more than a million years ago in Indonesia, to islands such as Flores and Sulawesi. Modern humans braved treacherous waters to reach Australia by 65,000 years ago. But in both cases, some archaeologists say early seafarers might have embarked by accident, perhaps swept out to sea by tsunamis.

In contrast, the recent evidence from the Mediterranean suggests purposeful navigation. Archaeologists had long noted ancient-looking stone tools on several Mediterranean islands including Crete, which has been an island for more than 5 million years, but they were dismissed as oddities.

Then in 2008 and 2009, Thomas Strasser of Providence College in Rhode Island co-led a Greek-U.S. team with archaeologist Curtis Runnels of Boston University and discovered hundreds of stone tools near the southern coastal village of Plakias. The picks, cleavers, scrapers, and bifaces were so plentiful that a one-off accidental stranding seems unlikely, Strasser says. The tools also offered a clue to the identity of the early seafarers: The artifacts resemble Acheulean tools developed more than a million years ago by H. erectus and used until about 130,000 years ago by Neandertals as well.

Strasser argued that the tools may represent a sea-borne migration of Neandertals from the Near East to Europe. The team used a variety of techniques to date the soil around the tools to at least 130,000 years old, but they could not pinpoint a more exact date. And the stratigraphy at the site is unclear, raising questions about whether the artifacts are as old as the soil they were embedded in. So other archaeologists were skeptical. 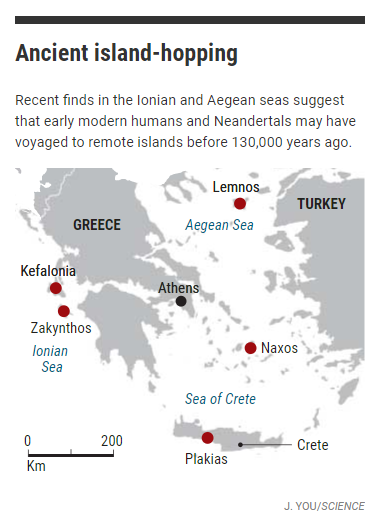 But the surprise discovery prompted researchers to scour the region for additional sites, an effort that is now bearing fruit. Possible Neandertal artifacts have turned up on a number of islands, including at Stelida on the island of Naxos. Naxos sits 250 kilometers north of Crete in the Aegean Sea; even during glacial times, when sea levels were lower, it was likely accessible only by watercraft. A Greek-Canadian team co-led by Tristan Carter of McMaster University in Hamilton, Canada, uncovered hundreds of tools embedded in the soil of a chert quarry. The hand axes and blades resemble the so-called Mousterian toolkit, which Neandertals and modern humans made from about 200,000 years ago until 50,000 years ago. These tools require a more sophisticated flaking method than Acheulean types do, including preparing a stone core before striking flakes off it.

Dating work on the artifacts is ongoing and Carter declined to comment pending publication. But Cherry says the Naxos evidence may be persuasive because it is well stratified, which means researchers should be able to date it more securely. “It is very convincing, because there are a lot more tools in situ,” adds Strasser, who, like Cherry, was not involved in the dig. “It is a quarry site littered with Mousterian stone tools.”

Other Paleolithic tools that appear to be Mousterian have been recovered on the western Ionian islands of Kefalonia and Zakynthos. The plethora of sites adds weight to the idea of purposeful settlement. “People are going back and forth to islands much earlier than we thought,” Simmons says.

But determining which of today’s islands were truly islands tens of thousands of years ago isn’t easy, as it depends on local land movements as well as broader sea-level changes, says Nikos Efstratiou, an archaeologist at Aristotle University of Thessaloniki in Greece. On the Aegean island of Lemnos, his team found what he thinks is a Paleolithic hunting camp dating back more than 10,000 years. But he can’t yet be sure when Lemnos was cut off from the mainland. Efstratiou adds that archaeologists need to better characterize the sorts of tools made on the mainland and the islands, so they can find links between the mainland and island peoples.

Other archaeologists are already reckoning with the possibility that humans and our cousins went to sea thousands of years earlier than had been thought. “We severely miscalculated,” admits Runnels, who excavated at the Crete site. If his colleagues are right, he says, “the seas were more permeable than we thought.”