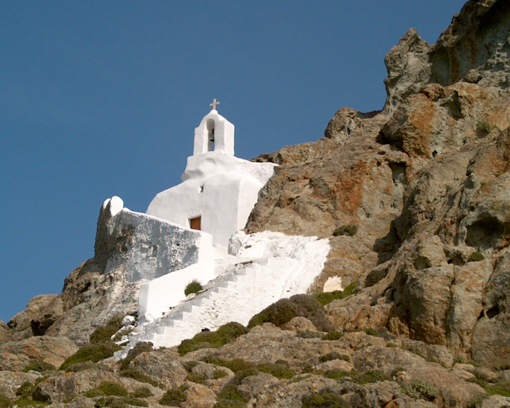 “Big Sweet has this island, virtuous are the faces of people, piles are shaped by melons, peaches, figs and the sea is calm. I looked at the people – never this people have been frightened by earthquakes or by Turks, and their eyes did not burn out.

Here freedom had extinguished the need for freedom, and life spread out as happy sleeping water. And if sometimes was discomposed, never rose tempest. Safety was the first gift of island that I felt as walking around Nàxos.” (N. Kazantzakis, “Report to El.Greko”).

Náxos is the biggest and the greenest island in Cyclades with impressively high mountains, fertile valleys, lush green gorges, stunning seascapes and traditional villages perched high on mountain tops, where the inhabitants still wear their traditional dress and live off the fruits of the land! Náxos is also an island of beautiful old churches, monasteries and Venetian castles coexisting harmoniously with Cycladic cubic houses. 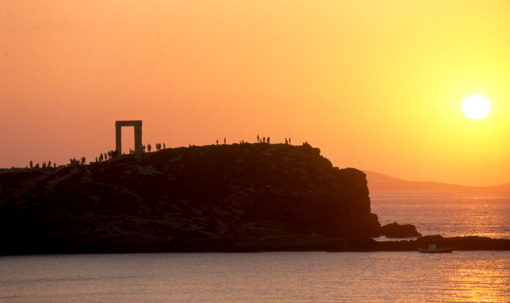 Upon entering the port, the whitewashed Hóra of Náxos and the islet of Palatia at its entrance form a most welcoming setting! On Palatia islet lies the impressive “Portára”, a marble gate of a 6th century BC temple of Apollo. According to mythology, the god Dionysus met Ariadni there, who had been abandoned by Thesseus. Hóra, the capital of Náxos, whose landmark is an imposing Venetian castle, is an old castle town with stone paved alleys (kalderímia) where you can admire a unique blend of Cycladic and Medieval architecture: mansions with Venetian blazons still decorating their entrances, narrow alleys with “stegadia” (arches), catholic churches and fortifications.

Visit the Archaeological Museum, housed in a historic building of the Venetian Period, housing finds from the Early Neolithic Age up to the Early Christian (Paleochristian) Period and an interesting collection of Cycladic figurines.

Discover the varied geomorphology and biodiversity of the island by following breathtaking routes all around the island (Hora–Melane-Halki, Halki–Danakos-Apeiranthos, Skado-Apollonas, etc.); follow the hiking trail from Apeíranthos (or Apérathos) to Moutsouna beach along the emery mines (12 km) and the breathtaking view to the Archipelago (all the way!) will make it up to you! Climb to the top of Zas Mountain, Cyclades’ highest mountain (1,004 m) and Fanári Mountain (908 m) or follow beautiful biking routes around the mountains! On your way to Zas’ top, don’t forget to visit the beautiful cave of Zas, that used to be dedicated to Milosios Zeus and observe its impressive stalactite formations.

Explore traditional villages spread around the island, with a particular, “magical” character: Apérathos is a colourful mountainous village boasting five museums, stone-built houses, beautiful squares and narrow alleys paved with marble, and Panayia Drosiani, a beautiful church of the Early Christian Period! Filoti, built on the top of a rock, is a picturesque mountainous village surrounded by lush vegetation with cubic shaped houses and narrow stone-paved alleys. The 9th-10th century church of Panayia Protothroni, situated at a close distance, is the biggest Byzantine church of Nàxos with murals of great value. The community of Sagri consists of five small villages (Ano Sagri, Kato Sagri, Kanakari, Kastraki and Mikri Vigla). You will feel admiration before the Venetian towers, the traditional windmills and a number of major Byzantine churches, like Ayios Mamas, all of which make Sagri the Mystras of Náxos albeit on a smaller scale! Close to Sagri lies the 6th century BC Demeter and Apollo sanctuary, made exclusively of white marble.

Náxos used to be the seat of the Ducat of the Aegean; a great number of well preserved towers can be seen on the island, bearing eloquent witness to the island’s glorious past. Explore among others the Bazeos Tower in Sagri, the Crispi-Glezos Tower (Hóra), the Belonia Tower at Galanado and Della Rocca- Barozzi Tower (Hóra).

Náxos is also famous for its wide variety of cultural events and traditional fairs that you can enjoy watching during your stay! Don’t miss the Naxos Festival, organised by the Municipality of Náxos at Bazeos Tower and “Dionissia”! It includes various fascinating events taking place all summer long! The celebrations culminate with the famous “Wine Festival” and the “Fisherman’s Feast” held in September.