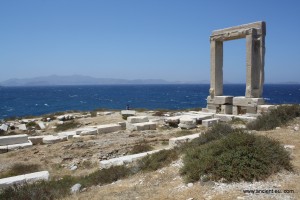 by Mark Cartwright
published on 02 March 2013

Naxos, with an area of 430 km², is the largest island in the Cyclades archipelago. The island enjoyed its most prosperous periods in the early Bronze Age and again in the Archaic and Classical periods.

In certain versions of Greek mythology, no less a figure than Zeus himself was brought up on the island and he was worshipped there as Zeus Melosios, patron of sheep. Apollo was also associated with the island and associated locally with goats, shepherds and florists. Ares, the god of war and general trouble-maker amongst the Olympian gods, sought shelter in the bowels of the island – described as siderobrotin petran – the place of iron-eating rock (meaning emery, the island’s famous export material used to fine-polish the marble so often used in Greek sculpture).

The god most closely linked with the island was, however, Dionysos. In Greek myth he was believed to have been born on the island and it was also here that the god of wine married Ariadne following her rejection by Theseus. The life, death and rebirth of Ariadne were worshipped in a major nature festival on the island.

The island was first inhabited in the Neolithic period with significant signs of occupation in the 4th millennium. In some accounts, the island gained its name from Naxos, the king of the Carians who settled on the island. From the 3rd millennium the Cyclades displayed a distinct culture of their own  – epitomised by the distinct Cycladic sculpture which had a penchant for minimalist standing figures carved from marble. From the middle Bronze Age, Naxos and the Cyclades were influenced by the Minoan civilization based on Crete and the later mainland-based Mycenaean civilization – evidenced in both architecture and art. The most important settlement at this time was Grotta, located on the western coast.

Settlers from Ionia occupied the island from c.1025 BCE. In the 8th century BCE the island, through export of its local marble and emery, was prosperous enough to found colonies. Naxos, in a joint venture with Chalkis, founded the city of Naxos in Sicily in 735 BCE, the first Greek colony on the island. Another example of Naxos’ wealth is the various monumental dedications that were made at the great sanctuary sites such as Delos (the famous marble lions) and Delphi (the celebrated Sphinx). However, it was in the late 6th century BCE that Naxos enjoyed its political and cultural zenith when the tyrant Lygdamis, assisted by his Athenian ally Peisistratus, took control of the island. During this period there was an extensive rebuilding programme to improve the various temples of the sanctuaries and Naxos became the dominant force in the Cyclades.

In the 5th century BCE the island became the centre of a revolution against Ionia when Naxian sailors backed the invading Persians, who attempted to occupy the island in c. 499 BCE. The strategy failed but in 490 BCE the Persians once more attacked and this time sacked the island, leaving those inhabitants not slaughtered, enslaved. Consequently, in the battles of Salamis (480 BCE) and Plataea (479 BCE) the Naxians, with their fleet of triremes, understandably sided with the Athenians against the Persians. In 474 BCE Naxos became a member of the Delian League. However, in c. 467 BCE Naxos rebelled against Athenian domination of the League but ultimately the island was brought into line and from c. 450 BCE an Athenian cleruchy established a semi-dependent status on the island, albeit with a reduced tribute payable to Athens.

Naxos was taken by the Romans in 41 BCE and during the Byzantine period, in the 5th and 6th centuries CE, many of the pagan temples, including that of Apollo, were converted into Christian churches.

Naxos had important temples dedicated to Apollo, Demeter and Dionysos and several lesser sites sacred to other gods. The temple of Apollo is situated on the islet of Palatia which is connected to the main island by a narrow strip of land. The site was traditionally where Ariadne was abandoned by Theseus and then picked up by Dionysos. Nothing remains of the 6th century BCE Ionic temple today except its foundations and the entrance of the prodromos to the inner cella  – the Portara (measuring 6m high and 3.5m wide). Once, however, measuring 59 by 28 metres, the temple would have rivalled any in Greece.

The temple of Demeter was built near the settlement of Ano Sagri in the Archaic period but the site may well have been the focus of worship to the traditional fertility gods Demeter and Kore as early as the 8th century BCE. From 530 BCE a new Ionic temple was built using marble. It is an early example of Classical architecture and one of the first temples to eliminate the second floor of the cella with the consequent increase in height of the inner columns to support the roof.

Dionysos was worshipped on the island from Mycenaean times and the surviving temple of Dionysos is situated near the village of Glinado. It is another example of early Classical temple architecture. The ruins today date from c 550 BCE but there is evidence that this structure was built on top of three earlier temples, each built over the site of the other. The previous temples were also dedicated to Dionysos and were destroyed by floods from the nearby river Biblinis. The last temple was dismantled by Christians in the 2nd century CE and a church dedicated to St. George was built in its place. Another interesting feature of the site is a 6th century BCE well, one of the few surviving marble-lined examples.

Written by Mark Cartwright, published on 02 March 2013 under the following license: Creative Commons: Attribution-NonCommercial-ShareAlike. This license lets others remix, tweak, and build upon this content non-commercially, as long as they credit the author and license their new creations under the identical terms.