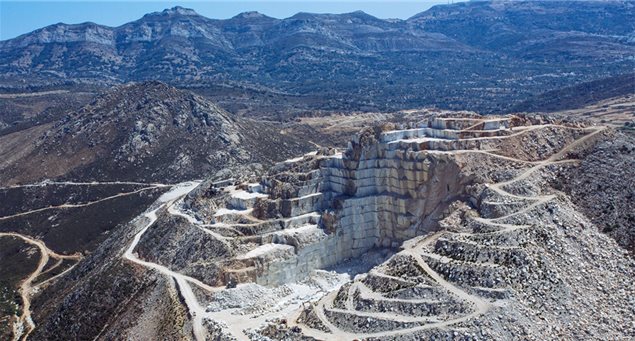 It’s almost hard to believe that just one area on Naxos has been the natural resource of marble since prehistoric times. And yet, it is this one group of five mountains near the area known as Kynidaros (a village 400 metres above sea level, and 15km east of Naxos town) that has been supplying local artisans and marble craftsmen — as artifacts found testify — as far back as the Neolithic age.

Today, the marble quarries buzzing and chiseling away at the gorgeous white slabs of gleaming limestone document the island’s history as producer of one of finest types of Greek marble, known commercially as Naxos Crystalline, albeit in limited quantities.

A few kilometres away, at the main port, proof of the island’s marble production past and present is evident in just one glance: Walk along the promenade that leads to the 6th century BC Temple of Apollo, atop the islet of Palatia, and on your right stands a 21st century statue of Ariadne.

Both were created with the same marble, just a few thousand years apart.

In fact, Naxos is known for its wealth of ancient marble temples, monuments and sculptures  (that still stand today). Remains from works of those days appear throughout the island, documenting to the modern world the significant contribution of Naxian marble and craftsmanship to the Cycladic (and protocycladic) civilization.

Finds of Cycladic figurines, fragments and sculptures — from as far back as 5th millennium BC — may be viewed at museums in Naxos and all over the world.  Marble remains such as the giant size Kouroi and the ancient sanctuaries of Dionysus, Apollo and Demeter exist in the same spots they were built.
It wasn’t until the late 1950s, however, that the road to modern marble quarrying officially opened.  As the bulldozer plowed to open a new road connecting Naxos Town to the village Kinidaros it was met with the “fountain” of marble.

There are several qualities that make Naxos marble unique.

It begins with its sparkle, the crystallization, making it one of the most popular. It is less porous than other types, thus more durable and less prone to stains from spills (if the spill is wiped in time, of course). The marble is used for various interior and exterior design projects such as tiles, building facades, floors, stairs and of course, works of art. Naxos marble is 2% quartz and 98% calcite giving it is shiny appearance that seems to gleam with the light.
A perfect example is the Temple of Demeter at Gyroulas, Sagri.

The Naxian marble official trade name is Naxos Crystallina. And there are three grades: white is the most exclusive of the three and makes up for 20% of the production; semi-white, the most commercial of the three at 50% and the grey, which is the third grade at 30% of the production. Interesting to note, according to specialists in the field, is that unlike other quarries, on Naxos, the marble rests on a vertical slope as opposed to a horizontal slope.

The mountain, or quarry locations, that feature the special Naxos marble around the vicinity of Kynidaros are known as: Sanidas (the oldest and still in operation); Zas (not to be confused with Mt. Zas it houses three quarries); Bolimbas (the largest visible from the road to Kynidaros); Diracha; and Amelathiou and Skaretzou (that are inactive at this time.)

The quarries are located just a few kilometers (about 7) from the ancient quarry at Flerio next to the village of Myloi. There, besides the abandoned Kouros, is the sanctuary of the giants Otus and Ephialtes that were protectors of the quarrymen in antiquity. The quarry workers in the Flerio area designated them as their protectors due to their supernatural strength, hoping this would help them in their hazardous and demanding job. This is suggested by an inscription found in the vicinity.

The limited quantities available further the “specialness” of Naxos marble.  It is easy to understand considering that just this one cluster of mountains around the region has fulfilled special demand for thousands of years.